Shippers: The Most Bombed Out Sector of the Market — Alex reveals his latest deep value thesis on the shipping sector. If you’re looking for dirt cheap stocks to buy check out this writeup.

Spinning Gold — Broyhill Asset Management put out a blog on spinoffs. Investing in them has been extremely lucrative for the managers that became specialized enough to separate the good from the bad. When someone says “spinoffs” most of us immediately think of Joel Greenblatt and his You Can Be A Stock Market Genius book.

But a relatively unknown man by the name of Bill Stiritz has actually been crushing the spinoff game well before Greenblatt ever released his book. By focusing on spinoffs, Stiritz was able to return 6100% to his investors over his 35-year career. $1 invested with Stiritz would’ve turned into $57 by the end of it all…

He did it by exercising time-arbitrage, or as Munger would put it “sitting on your ass.” By extending holding periods well past the average investor you can realize returns that many just don’t have the patience for.

What Is Amazon? —  I stumbled across this piece by Zack Kantor on Fintwit. It’s a short essay on the history of Walmart, what made them great, and ultimately what led them to give up the retail throne to Amazon. It’s a highly engaging piece about the inner workings of a large retail company and what it takes to succeeds in that business.

These days there’s a lot of talk about regulators coming in and breaking up the big tech companies under antitrust laws. But Zack shows that this threat is minimal for Amazon because it has such a good track record of anticipating regulatory destructing and changing course proactively.

We’ve seen the strategy that Amazon takes when it sees a regulatory threat looming on the horizon; it voluntarily started collecting sales tax in many states before states could force it to do so, and adopted a $15 minimum wage before it drew the full ire of a populist movement. With multiple headquarters distributed across multiples cities and outside access provisioned for all of its key products and services, Amazon seems more likely to break itself up – along its own preferred lines – than it is to be forcibly disassembled by regulators.

I also liked his final summary for what Amazon has become and what it must do to survive and remain king of the retail hill for the decades to come.

So, what is Amazon? It started as an unbound Walmart, an algorithm for running an unbound search for global optima in the world of physical products. It became a platform for adapting that algorithm to any opportunity for customer-centric value creation that it encountered. If it devises a way to keep its incentive structures intact as it exposes itself through its ever-expanding external interfaces, it – or its various split-off subsidiaries – will dominate the economy for a generation. And if not, it’ll be just another company that seemed unstoppable until it wasn’t.

Alex here. Just jumping into Tyler’s Musings this week to share with you a killer podcast I listened to the other day. It was recommended to me by one of my old Marine buddies and I was hooked for the full 2+ hours of the chat. It’s the Jocko Podcast episode 89 titled “The Critical Importance of Taking Care of Your People” with Frogman and Medal of Honor recipient Mike Thornton.

Thornton is a Vietnam Veteran and a legend in the Teams. He shares the leadership lessons he learned during his storied career as well as recounts the incredible mission for which he earned the MoH. The dude is one bad mamma jamma. Give it a listen. You will not be disappointed. Here’s the link.

Here’s an interesting chart I found while reading a BoFA report this week.

The delay in tax refunds started two years ago when the IRS passed a law requiring further verification for those claiming the Earned Income Tax Credit (EITC) or the Additional Child Tax Credit (ACTC). For the last two years, refunds were delayed until Feb 15th for this population, but this year they were delayed until Feb 27th because of the timing of the President’s Day holiday

The lower income cohort is disproportionately impacted by this law. Households earning less than $50K a year saw a meaningful delay relative to before the law was passed, but those earning more than $125K saw little change.

The good news is that the cumulative amount of refunds caught up by the end of the month. However, there was still less time for consumers to spend their refunds in February. We think this creates a downside bias to retail sales, which is confirmed when looking at the income level spending data.

Bottom line: although there were good reasons, the consumer cut back spending at the turn of the year after a period of robust activity in 2018. We believe that once these special factors reverse, the reality of healthy fundamentals will set in, supporting spending in the spring.

That means we should see the next retail sales number tick up and support this bid in US equities. The US government shutdown earlier this year actually caused some huge data issues for our beloved COT reports. We haven’t been able to look at reliable positioning data because the CFTC had stopped releasing the data during the shutdown.

But finally they’ve been able to catch up and we are back in business!

The Crude Oil Spec chart caught my eye this morning as I was going through the latest data.

You can see that specs aggressively sold crude during the end of 2018 creating a historically extreme short positioning. And of course, when you check out the price action in crude it’s about to break out to 50-day highs and squeeze the hell out of all of these specs. 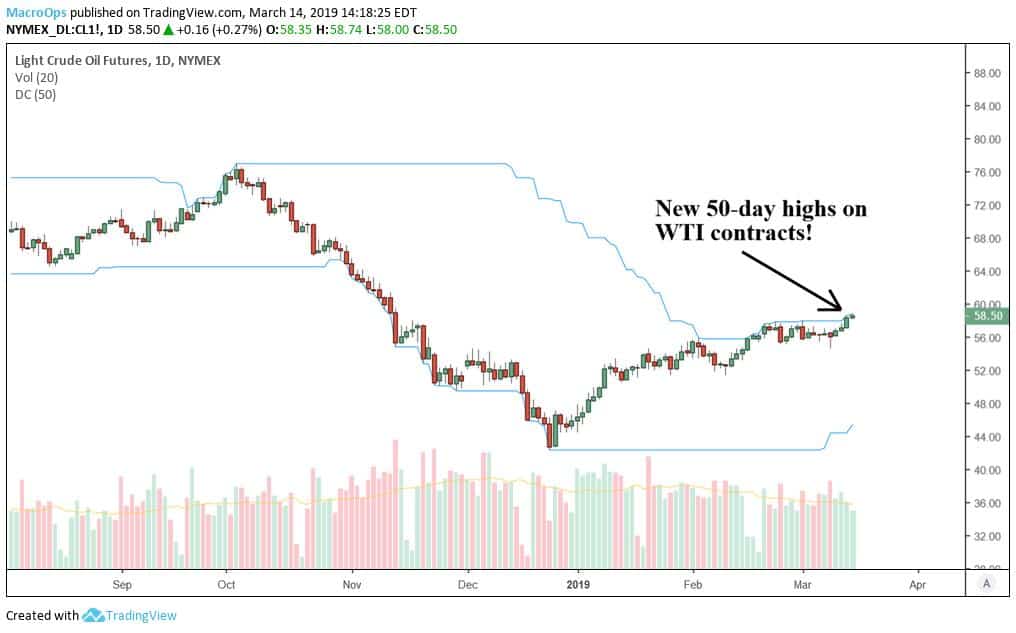 We’ve started to nibble on the long side here. Alex has a more in-depth fundamental note on crude that we released to Collective members yesterday. If you’re interested in checking that out, shoot us an email.

We might describe our world as having retail sanity, but wholesale madness. Details are well understood; the big picture remains unclear. A fundamental challenge… is to integrate the micro and macro such that all things make sense.~ Peter Thiel

Indeed. That’s the hardest part about picking stocks, making sure the micro thesis also fits the “general conditions” of the market.