How One Man Traded His Way To Billions, Cold Showers, and The Freedom Dividend

Using Political Prediction Markets For Fun And Profit — Tyler shows how to use political prediction markets to calculate the implied probability of a candidate becoming elected. With the right strategy you can even arbitrage these markets against a pesky political acquaintance and make some guaranteed money on election night!

An optometrist who beat the odds to become a billionaire — Herbert Wertheim built himself a $2.3 billion fortune by using Warren Buffett style investing principles. He has an extraordinary investment track record but isn’t widely known because he never managed outside capital. His fortune was built by finding companies he felt had quality intellectual property and then holding onto those stocks for decades.

Instead of concentrating on the metrics in financial statements, Wertheim is devoted to reading patents and spends two six-hour blocks each week poring over technical tomes. “What’s more important to me is, what is your intellectual capital to be able to grow?” Thanks to his engineering background, the technical nature of optometry and his experience as an inventor, the patent library is Wertheim’s comfort zone. Stocks he invested in based on their impressive patent portfolios include IBM, 3M and Intel.

Participants who took the cold showers actually reported feeling ill just as many days, on average, as the people who showered normally. But either their symptoms were less severe or they felt more energetic, so they were better able to push through the sickness and function anyway.

The article says that even a 30-second cold blast at the end of each shower has benefits. I personally have been implementing this in my routine over the last few months and have noticed the benefits. I’m able to power a little bit harder through workouts, arduous work projects, and other things I don’t enjoy doing. My general energy levels also feel higher.

I started off with a simple 30-seconds of cold at the end of each shower. But now I’ve worked up to a 1-minute start and a 1-minute finish of cold water.

Fighting that urge to skip the cold blast each day I find empowering. It’s a small mental win that subtly boosts my confidence and mood. 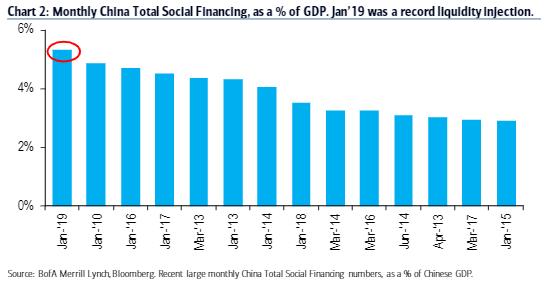 I saw this in a BofA report this week. Around 40% of their clients think that the key to getting the Eurozone out of its current growth funk is via China stimulus supporting German exports.

Whether the transmission mechanism of China’s easing will be effective this time remains to be seen, especially with high China total debt levels, and in particular rising Chinese household debt/GDP.

Yet, there’s no denying that China is serious about fighting its growth wobbles: the chart above shows that January’s Total Social Financing number of CNY 4.64tr. was around 5.5% of Chinese GDP…the biggest monthly liquidity injection ever registered. I think the Chinese stimulus we saw in the first chart was a large reason for this v-shape recovery in equity markets.

But the other obvious key driver is the epic backtrack in central bank hawkishness. In 2019, the Fed has already pivoted to being on-hold, the ECB has moved the balance of risks to the downside, Australia has stopped hiking and India has delivered a surprise rate cut.

When the most important central bank in the world changes course, others must follow…or risk unwanted currency appreciation. True to form, as the above chart shows, the number of global central bank rate cuts over the last 6m is now greater than the number of central bank rate hikes. And when central banks flip-flop, so do markets. With interest rate vol at record lows now in Europe, this means a green light for carry trades and a return of the thirst for yield.

Charlie Munger Speaks at Daily Journal Annual Meeting — Munger stays true to form and delivers yet another epic speech on the art of investing. It’s crazy how much wisdom this guy can spit out still at the age of 95.

If your short on time, fast forward to 23:30 in the video and listen to his spiel on diversification. He talks about how the key to beating the indices is to have a few times when you know a play is better than average and then betting big on that play.

For all of my life, I’ve never been able to get fired up about politics. Candidates rarely inspire me, I don’t like to waste energy thinking about the pointless hot topic battles they spend their time talking about. And it annoys me when they go on and on about how bad everything is. To be honest, for the last 8 years or so I’ve tuned out unless it impacted a trade I was making in the markets.

Well recently the nihilist in me has been slain. On Joe Rogan’s pod, he interviewed democratic candidate Andrew Yang (Link here). I’d never heard of Andrew until this interview and I came out of the episode a huge fan. Yang talks clearly, approaches problems logically, and leaves out all of the identity politics that plague our system.

Yang is pushing hard for a universal basic income — a $1,000 monthly check to every American over 18 years old. You can check out his logic for why he likes UBI here on his website.

And I highly encourage a listen to his interview with Rogan so you get a feel for his personality. We’re long Disney partly because of its booming theme parks business. Nintendo, the creator of video game hits Mario, Super Smash Brothers, Legend of Zelda, Donkey Kong, and Pokemon has decided to do something similar which has got us interested.

Nintendo is working with Universal Studios to open three theme parks at existing Universal properties in Florida, California, and Tokyo, starting in 2020.

I think this is largely an IP play, one Herbert Wertheim from the beginning of this Musings would look at with excitement.

The titles and characters that Nintendo owns are timeless and ingrained into our culture. In my opinion, there is a tremendous amount of value that is still locked up inside this $32 billion company, even before considering its $8.7 billion in cash and nonexistent debt.

Yep, I couldn’t agree more. In order to survive for the long haul in this game you have to know yourself emotionally inside and out. And you can’t do that unless you have an amount of money on the line that makes you slightly uncomfortable — something in between no feeling and can’t sleep at night.

If you’re not already, be sure to follow me on Twitter:@tylerhkling. I post my mindless drivel there daily.