“My interpretation of financial markets differs from the prevailing paradigm in many ways. I emphasize the role of misunderstandings and misconceptions in shaping the course of history. And I treat bubbles as largely unpredictable. The direction and its eventual reversal are predictable; the magnitude and direction of the various phases is not. ” ~ George Soros

In this week’s Dirty Dozen [CHART PACK] we go through all the danger signals suggesting its odds on we soon see a 1-2 month pullback/consolidation range. We follow that up with the reasons why this isn’t the market top but rather a normal pullback in a broader uptrend. After that, we dive into the reasons why the reflation trade is about to take a bit of a breather and end with a biotech long breaking out of long-term consolidation.

1. Sentiment & positioning is one of those things that doesn’t matter until it really does. Here’s the breakdown of the current “euphoric” environment via BofA: 4. The Dow Jones Transportation Average triggered a sell signal in January. Here’s how to read this chart.

December’s Doji (highlighted in yellow) gave us a sell setup. January’s Outside Bear Bar closed on its lows and gave us a sell signal. But, the incredibly strong bullish thrust of the preceding 8 bars means this pullback will likely be bought after a 1-2 month pullback/consolidation.

5. Investors who continue to try and call a top will once again be disappointed… The economic backdrop is not one you want to fade. 92% BofA’s proprietary suite of growth indicators “are flagging a Bullish/Neutral signal, the highest level on record.”

6. This growth is being driven by a tsunami of liquidity. BofA writes “…the last three decades have not witnessed this combination of animal spirits and a system flush with liquidity. All regions across the world are, at present, privy to surplus free liquidity — currently growing at 55% YoY in the US (highest on record since 1980; substantially higher than 32% in the aftermath of the Global Financial Crisis.” 7. While the long-term economic backdrop looks increasingly bullish, the shorter-term one has been widely discounted and is at increased risk of a washout.

Bloomberg points out that money managers are more long commodities now than they have ever been in at least a decade. 8. The rebounding economy and wall of liquidity plus declining COVID hospitalizations (largely driven by increasing vaccination numbers) here in the US definitely support the reflation narrative.

9. However, the same cannot be said for the rest of the world. The WSJ quotes a recent UBS report, saying “At the current rates of vaccination, only about 10% of the world would be inoculated by the end of the year and 21% by the close of 2022.” 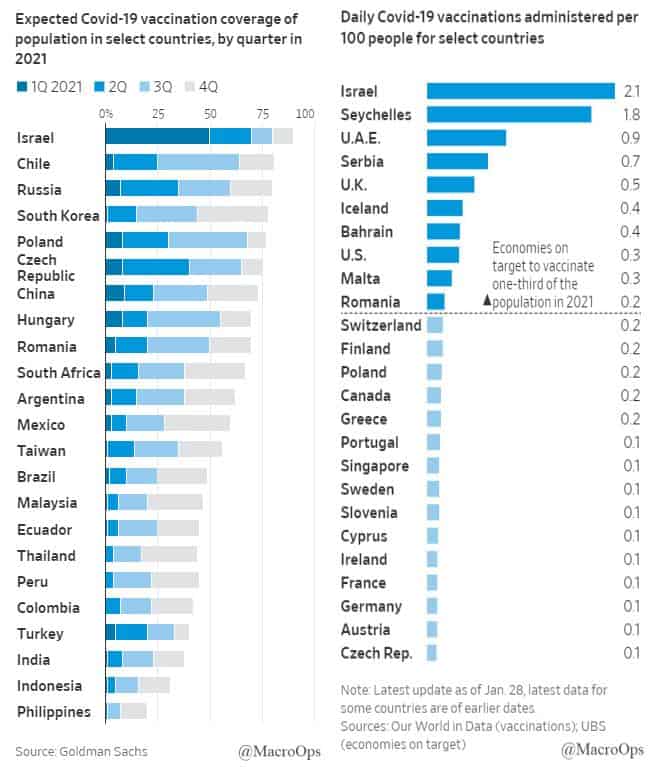 10. The US’s greater capacity for fiscal policy combined with its inordinate access to vaccines, means it’s likely to outperform the rest-of-the-world on the economic growth front. That superior relative growth performance could upset the extremely crowded short USD positioning and potentially kick-start a risk-off feedback loop. 11. While I remain a cyclical USD bear, I do believe there’s a decent probability we’re about to see a multi-month counter-trend move. USDSEK’s monthly chart looks ripe for a reversal. 12. SPDR’s S&P Biotech ETF (XBI) looks to have ended its multi-year bout of relative underperformance versus the Nasdaq. Bios have some of the strongest long-term charts at the moment. Illumina (ILMN) is one of these names with a great tape. Last month, the stock broke out of a 2 ½ year consolidation range.