Why I’ve Changed My Mind on POWW

POWW reported earnings on June 29, and there’s a lot to unpack.

In my last note, I explained what I wanted to see from the company’s upcoming earnings:

And a cursory glimpse at the company’s ER would have you believe things are going exceptionally well. That’s not quite true.

We’ll also discuss what POWW can do to improve these issues while the window (and my patience) for management to perform quickly closes.

The bottom line is that I do not have faith/trust in the current management team to execute and deliver shareholder value.

With that rosy picture, let’s get after it!

POWW bifurcated its income statement between “Ammunition” and “Marketplace.” This allows us to independently examine the health of each business segment.

Let’s start with the Ammunition business.

We didn’t get those improvements. In fact, things got worse. Moreover, the company’s ammo business generated only $1.82M in operating income yet accounted for 73% of total sales.

Check out the Cash Flow Variance Analysis for the ammunition business below. POWW grew ammunition revenue by 181% while increasing its A/R by 388%. The A/R balloon increased Days Receivables from ~53 days to ~92 days.

I assume POWW sold its product to distributors (like Bass Pro, Sportsman Warehouse, etc.). They then booked it as revenue but can’t collect the cash because end customers (you and me) aren’t buying.

So despite growing revenues by $113M, the A/R issues resulted in a -$35M cash headwind.

POWW increased its inventory by $43M YoY to $59M, resulting in 123 Days of Inventory (versus 93 last year). Management blamed its current facility for the inventory buildup, suggesting they don’t have enough truck bays to load/ship products.

But this begs the question. If end customers aren’t buying the products, why would shipping more products help? The negative cash impact from inventory (-$43M) would simply shift to A/R.

The end result is an ammunition business that takes ~37 days longer to get paid for its product than it did last year (158 days vs. 121 days) with worsening Inventory and A/R controls.

Let’s shift our focus to POWW’s Core Operating Profile, which you can see below. POWW’s Ammunition business generated ~19% gross margins with a ~2% Operating Cushion. While this is an improvement over last year, it’s still a bad business.

After subtracting the company’s cash headwinds (mentioned above), you get a -72% Core Operating Profile. In other words, the ammo business lost $0.72 for every $1 in incremental revenue growth.

Assuming Wiley’s right (quite the assumption), POWW would generate a ~20% Operating Cushion in its new facility.

POWW’s Core Operating Profile would look something like this at the new facility: 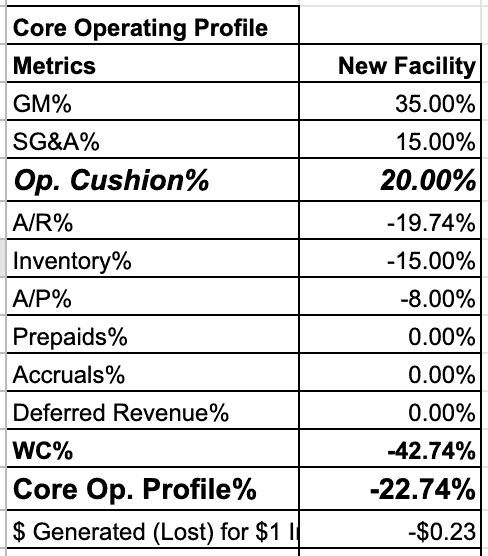 Despite improving gross margin and inventory, POWW’s ammo business would still lose $0.23 for every $1 in incremental revenue growth.

Time will tell if POWW improves inventory and gross margins in its new facility. However, it would take dramatic improvement in multiple levers to reach positive dollar contribution growth.

Luckily, POWW also owns a high-margin online marketplace business called Gunbroker.com. But even that has its issues.

Gunbroker is a high-margin online marketplace with 85%+ gross margins and ~66%+ EBITDA margins.

You can see Gunbroker’s Cash Flow Variance Analysis below. We don’t have A/R and A/P data on Gunbroker, so we assumed similar percentages to another online marketplace, eBay.

Gunbroker boasts a 73% Operating Cushion and generates $0.53 for every $1 in incremental revenue growth.

I know two years isn’t enough time to judge the quality of an investment. But POWW paid ~4x sales for a marketplace growing 4% per year. Revenue growth must increase to justify that investment.

There are a couple bright spots from Gunbroker. First, management increased take rates to 5.1% compared to 4.6% in 2021. Second, the marketplace generated $35M in operating income, nearly the entirety of POWW’s reported earnings.

The first two sections examined my issues with POWW’s business operations. The following sections outline my frustrations with POWW’s management team and general discrepancies within the company’s financial reporting.

Take Wednesday’s earnings call, for example. Someone asked, “last call, you authorized funds for purchasing shares. Can you make any comment as to whether you have done that or not?”

Usually, that’s a question for the CFO. But Goodmanson answered. His response was hilarious (emphasis added):

“We have not [bought stock] … When it is a better time to start acquiring the stock from the open market, you will see it and that will be announced.”

I couldn’t believe it.

The same management team said they’d print $100M+ in Adjusted EBITDA in 2023. That implies a ~30% EBITDA yield at the current stock price!

What “better time” to buy your stock than at a 30% EBITDA yield? It doesn’t make sense (unless it’s bullshit EBITDA).

One could argue, however, that management should invest in its business to further grow. Maybe it does generate >30%+ yields on those dollars. Yet as we outlined above, POWW’s ammunition business generates a ~2% operating cushion. So are those dollars truly better spent in that business?

Even more confusing is that POWW’s own financial statements show a decreasing YoY share count.

What happened to those 2M shares if the company didn’t repurchase them? Excise taxes are cash expenses, so I don’t know why they’d add that back.

I’m also curious about what “Stock for Services” means.

Again, none of this passes the Management Quality Smell Test.

This brings me to my final gripe with POWW: complete management ineptitude.

Running a company is more challenging than anyone imagines. I understand that. However, POWW’s management team misses on fundamental questions involving capital allocation, financial reporting, and general online marketplace knowledge.

Gunbroker.com is the perfect example of management’s ineptitude.

The marketplace generated nearly all of POWW’s 2022 Operating Income.

Yet the company instead invests in its lower margin (and significantly worse) ammunition manufacturing business. This begs questions like:

Management also sounds like they have no clue how to run a marketplace business. It’s evident if you listen to the earnings calls.

How hard is it to get an online marketplace expert on the team? Where is Steve Urban? Is he actively contributing to Gunbroker’s operations?

I left POWW’s earnings call with more questions than answers. I have little (if any) faith in the company’s management team to properly and effectively allocate capital.

There are still ways POWW can right the ship and improve its ammunition manufacturing business.

However, why give this management team our money when there are much better operators whose companies trade at wildly discounted prices?