The potential for trade wars and tech regulation is increasing. And these are real market risks. But so far, it’s all talk and speculation. They remain low probability events. We need to closely monitor them but not overweight them in our decision making.

Currently, the key driver of market direction over the near-term is interest rates and thus inflation expectations. This is why we’ll need to keep a close eye on inflation indicators in the coming months.

The cyclic environment is currently supportive of building inflationary pressures. The economy is maxed out, as measured by capacity utilization and the GDP gap. The labor market is tight and this is beginning to drive up wage pressures. The US dollar, which has shown an increased correlation (or causal link) to inflation these last two cycles, is signalling a jump in inflation over the coming months. Lower dollar = higher inflationary pressures through the commodity price channel. Dollar is inverted on the chart below. But on the other hand, we have disinflationary pressures coming from a deleveraging China, which is showing in falling exporter producer prices. There’s also still the issue of a world awash in debt. And debt is naturally a deflationary force.

The developed world is only beginning to chew through the massive debt load it accrued over the previous two cycles. This is why developed market credit growth has been so anemic lately. 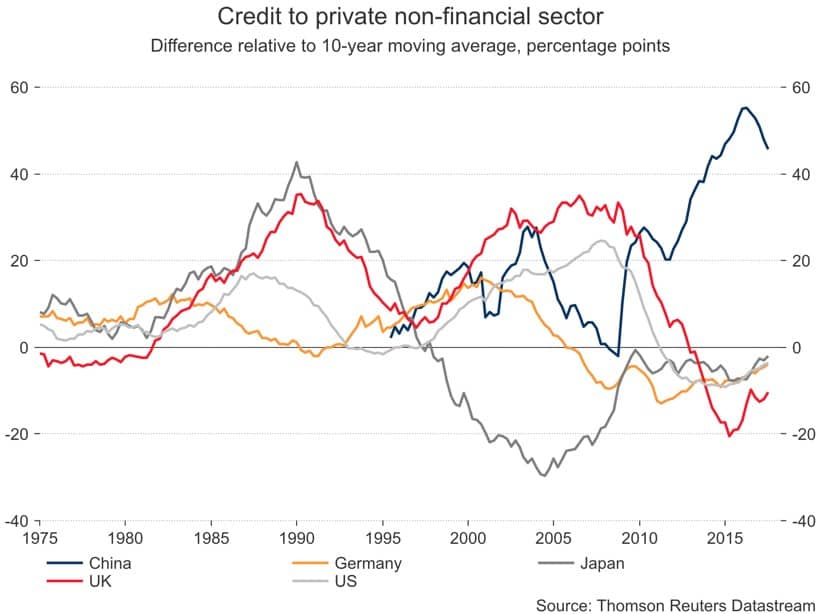 In my eyes, the inflation picture remains mixed.

Pressures are building in the economy which is typical this late in the cycle. But it’s to be seen whether this will be strong enough to counteract the disinflationary pressures of the global debt load and a deleveraging China in any meaningful way.

My base case is that we see inflation continue to rise modestly but not enough to make the Fed ramp up their hawkishness.

Of course, I could be wrong. I think the big tell will be the US dollar which is now at a critical inflection point. If it takes off on another leg lower then we’ll see commodities run up, giving a boost to inflation.

This would shorten the last phase of this bull market…

The primary trend in global markets remains up. But we’re likely to go through a gestation period while the last vestiges of overly bullish sentiment get washed out. This should result in continued volatile chop for some time (a few weeks to months) while a new base develops from which the market can launch its next leg up.

The key here will be managing our risk and not overtrading. We don’t want to get chopped up in the sideways action. We’ll be selectively adding starter positions in trades that have a low correlation to the broader market.

The above was an excerpt from our Macro Intelligence Report (MIR). If you’d like to learn more about the MIR, click here.