Take 20 minutes and read Michael Mauboussin’s latest paper on how to better compare things — in this case, stocks — in order to more effectively derive their relative values. The paper is titled How Well Do You Compare.

Michael first talks about how we are wired to use analogies to try and understand things and arrive at conclusions. This is very useful but it’s also full of cognitive pitfalls when analyzing complex subjects where the most available analogy may not be the most useful.

He then lays out a number of frameworks available to do comparative analysis; along with their strengths and weaknesses. Here’s the three methods he suggest using.

The main point of the paper is to be more critical in what you choose to compare things to. Heuristics are readily available but often ill-suited for the task. Thinking deeper about the “similarity” between the comparative entities leads to better results.

Also, here’s an older but still great post from Meb Faber in which he shares his notes on an “investing checklist” from a class that was taught by the Tiger Cub John Griffin (who was a talented fund manager that just recently closed shop).

My favorite of the Berkshire duo, Charlie Munger, recently gave a talk at the Michigan Ross School of Business. Munger is the Yoda of markets… the guy is a fountain of wisdom as well as a great storyteller. I try and listen to any talk he gives because I learn something new every time. This chat was no different. It’s filled with great stories on what it was like growing up during the depression, and getting started in markets, as well as valuable mungerisms on how to set yourself up for success with better mental models and daily habits.

It’s just under an hour long and definitely worth the watch. Here’s the link. Also, go read Poor Charlie’s Almanack if you haven’t already. It’s one of my all-time favorites.

This week I’ve been reading Debunking Economics by Steve Keen.

I’m only about 100 pages in and it’s a nearly 500 page book so I can’t give a conclusive take on it yet. I’ll do a more extensive write up once I finish. But I do like what I’ve read so far.

The book is a takedown of neoclassical economic (mainstream) theory and all the crazy models and ideas that go along with it and which only a removed arrogant academic could dream up.

He then covers his own theory of economics, which he hopes will someday replace the neoclassical school. I haven’t arrived at that part of the book but I’ve heard him interviewed a few times. He seems to be pitching a much more useful monetary credit based model of viewing economics, similar to what Bridgewater uses for understanding markets.

Keen was recently on the MacroVoices podcast with Eric Townsend. I suggest giving that a listen if you’re not familiar with his ideas (here’s the link). He also has a page on Patreon with some useful videos outlining his theory along with links to his “Minsky Model” program which you can download for free (link, link 2).

We’ve been sharing similar charts to the one below for months now. We’ve been energy and select Ag bulls since late summer. A bet that has been paying off and which we think is only getting started. Commodities are at record lows relative to stocks. Throw in the S-curve wealth/demand growth from a rising global middle class (over 4B people for the first time in world history) over the coming decade(s) and you have a pretty asymmetric long-term bet on commodities. 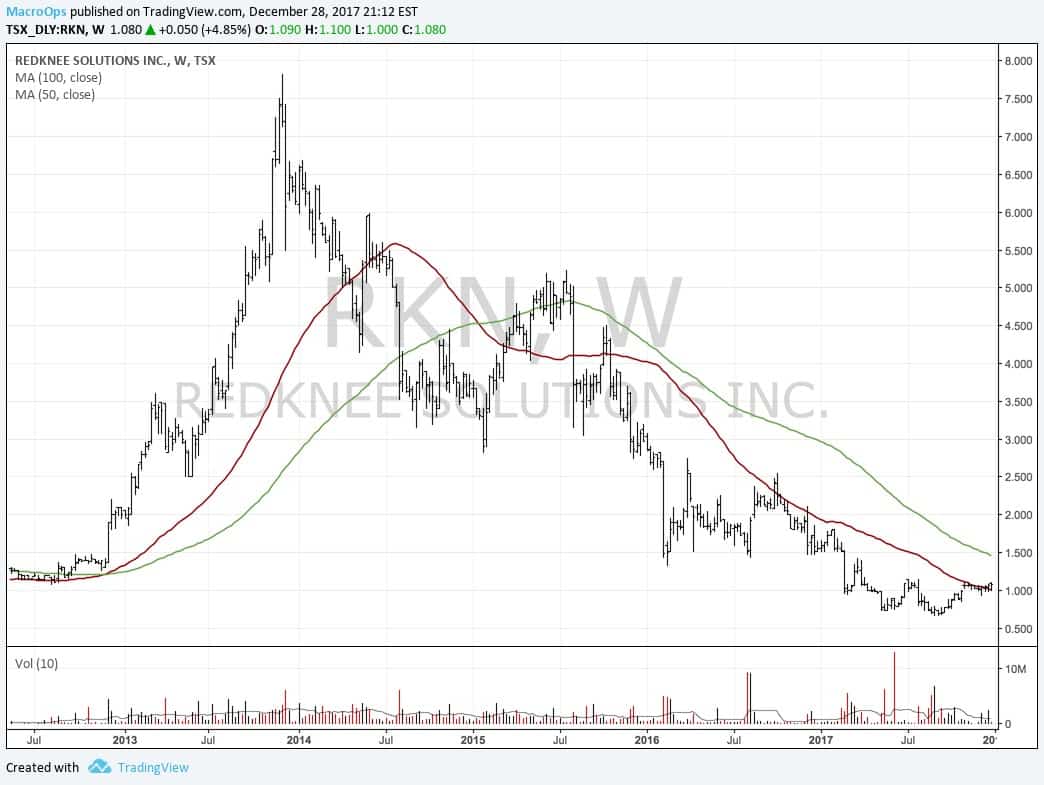 Here’s a trade I’ve been digging into: Redknee Solutions (RKN). I got the idea from Scott Miller, hedge fund manager of Greenhaven Road Capital (and someone I’m constantly stealing ideas from). Here’s the summary of his long pitch from one of his latest quarterly letters (emphasis mine).

Redknee (RKN) – This past quarter RedKnee conducted a rights offering, allowing existing shareholders to buy additional shares at a discounted price. The company will use the proceeds to fund their restructuring, which includes significant layoffs and product investments.

The rights offering was fully backstopped by ESW Capital, a growth private equity firm focused on business software companies. ESW has invested over $100M into RedKnee and placed the CEO, who knows the playbook very well and has taken substantially all of her compensation in company stock. ESW’s track record of success in the software industry was discussed at length in Greenhaven Q1 letter. Suffice it to say, I think the “A Team” has arrived. They have begun to outline a restructuring process that will rationalize what had become a bloated organization following two major acquisitions. Redknee billing software is used primarily by wireless phone companies. Under previous management, copious amounts of money were spent on R&D to expand beyond the telecom market. The ESW plan is to focus the company entirely on telecom and have customer needs drive the product investments. Turnarounds take time, even when the “A Team” is executing them. The recent rights offering was done at a substantial discount to any multiple of run rate recurring revenue at which competitor stocks are currently trading. I would expect Redknee short-term earnings to be between dismal and horrible as tens of millions of dollars of restructuring costs hit the income statement. However, over time, ESW has a very good chance of building the company into a profitable business that could be a successful acquirer in the telecom software vertical.We paid a more than fair price to back a very strong and well invented team trying to execute their 41st software turnaround and focus on the wants and needs of their customers. I like our chances.

There’s a more indepth write up, which is pretty good, on Seeking Alpha. Here’s the link.

The pitch is simple. RKN is a turnaround play of a company that previously floundered under mediocre leadership which led to lack of execution focus and bloating expenses.

The turnaround is being led by ESW Capital. ESW has a stellar track record of buying into struggling tech companies and righting the ship. They’ve put $100M+ into the business, installed their own veteran CEO, and are heavily incentivized to do good work. But like Scott points out, restructurings and turnarounds are never cheap and over the near term the numbers will suffer.

Technically the stock looks like it’s putting in a base. I’m considering putting on a small starter position.

When I was in the first grade, the teacher asked each of us what we wanted to be when we grew up. I said, ‘a detective.’ This investigative nature has carried through into adulthood. I love searching for clues, synthesizing tons of unrelated data, and arriving at a logical conclusion. While these observations are not entirely scientific, they are things I’ve seen repeatedly over the years. ~ Marty Schwartz

The more time I spend in this game the more I realize that the vast majority of people (traders, managers, pundits) don’t know what the frack they’re talking about. This game is hard and complex. And because of the way we’re wired, we instinctively default to easy answers, which are more often than not, wrong. We prefer nicely packaged popular accepted “truths” over hard wrought contrarian independent thinking/ideas.

The fact is that it’s just so much easier to be lazy. To only look at a couple of valuation ratios and maybe draw a trendline to make a trade decision versus digging into the footnotes of a 10K or brainstorming “what ifs?” and scenario gaming.

Most people don’t want to do the work. Because of this, there’s a LOT of edge in just putting in the time and effort to develop the necessary skills and do the tough work. You need to be a hard charging market detective like ole’ Pitbull Marty Schwartz. There’s no easy way to winning in this game.

If you’re not already, be sure to follow us on Twitter: @MacroOps and on Stocktwits: @MacroOps. I posts my mindless drivel there daily.