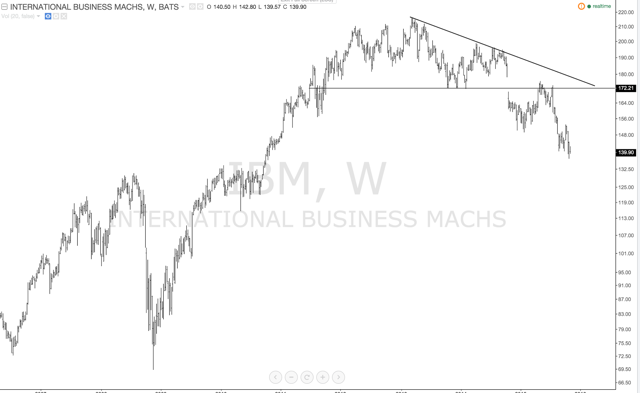 IBM has quickly become the poster child of the popular “buybacks-trump-everything” financial engineering phenomenon. This will not end well for its stock price.

Big Blue used to lead American innovation, but not anymore. Instead, it now epitomizes everything wrong with the greedy short-term thinking that plagues c-suite ideology.

Let’s first make it clear that we have NO problem with companies buying back their stock. In fact, we think it’s a great way to reward shareholders. In many regards, it actually makes more sense than returning capital through dividends.

But we do take issue with companies misallocating their capital to manipulate their earnings. Company officers intentionally skew earnings ratios to boost their own bonuses. This generally comes at the expense of a company’s long-term future.

This is particularly troubling when it happens at an American stalwart such as IBM. Especially when their business model faces more external threats than ever before.

IBM’s blind myopia is glaringly evident in their recent quarterly results. Here is a quick rundown of just how bad things have gotten at the company. 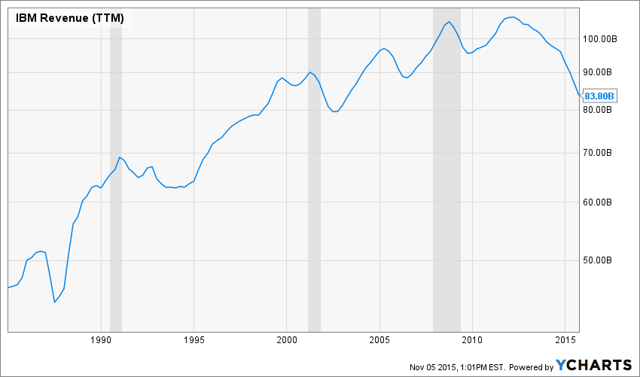 This revenue miss is not some little blip either. Sales have actually been declining for 15 straight quarters. To say it another way, sales have been falling for nearly FOUR straight years.

And the decline in sales has not been slow or shallow either. The company has been experiencing its largest topline losses on record in over 30 years. 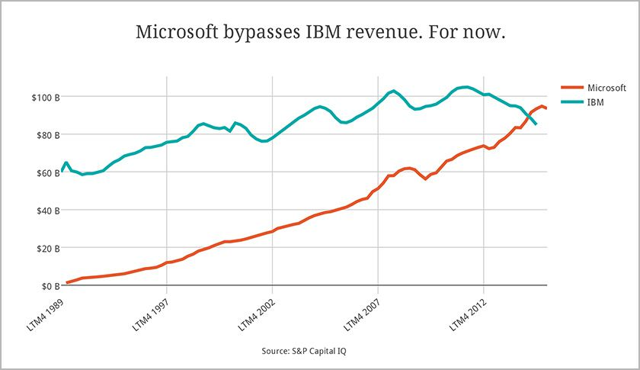 This decline isn’t due to some secular shift affecting the entire tech industry. Sales at other companies, like long-time fellow tech stalwart Microsoft (MSFT), have been exploding the past seven years.

So what’s wrong with IBM?

Other companies have spent the last decade investing heavily into R&D, innovating new technologies and rapidly expanding their market share. IBM on the other hand has been stuck on a path set by former CEO Samuel J. Palmisano over a decade ago. And that is to financially engineer results at the expense of long-term growth. 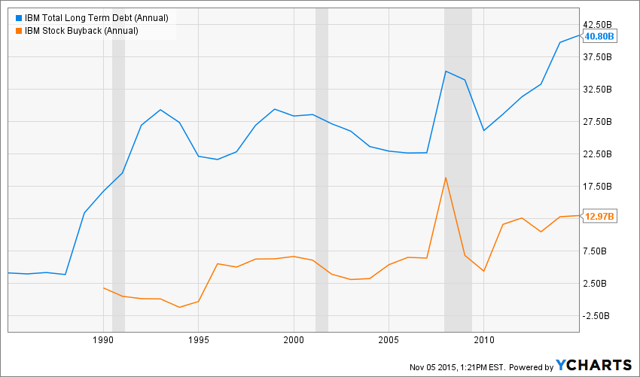 The chart above shows how IBM has seen a TON of growth over the last 25 years. Unfortunately, that growth has all been in the company’s long-term debt. They used the debt to buy back shares, decreasing their outstanding stock by over 60%.

IBM’s current earnings per share EPS – the most common ratio to which executives’ bonuses are tied – are near an all-time high. The company probably won’t reach its original stated goal of earning $20 a share, but it sure has put in quite the effort. 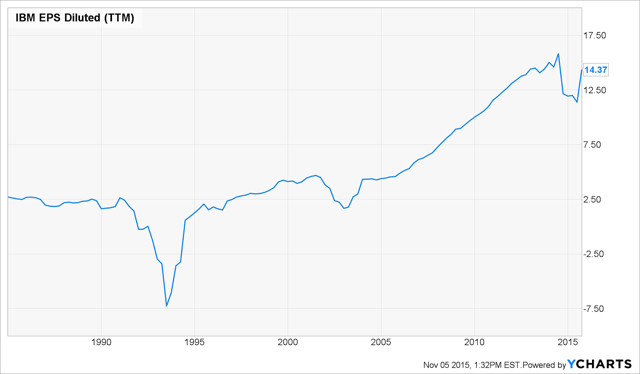 But this EPS growth is bogus.

Many people don’t understand how EPS and P/E ratios can be manipulated, so let us explain.

To calculate EPS, you divide the company’s total earnings by the shares outstanding.

The company can then report a higher EPS without ever increasing its REAL earnings.

In fact, a company’s profits can decline while its EPS increases. This can occur if share buybacks are large enough to counteract falling bottom line growth.

The P/E ratio is the price of a stock divided by a company’s EPS. By manipulating its EPS higher, a company can lower its resulting P/E ratio. This makes the company appear to be a better value.

This is exactly what IBM has been doing for the last decade and a half.

The company has been juicing its financial ratios by borrowing billions of dollars to buy back its shares. All just to make the company appear to be a better value so that IBM leadership can claim success. And this continues to occur as the company’s true underlying fundamentals rot.

IBM spent $5.4 billion on R&D last year. This is the LOWEST amount it has spent on R&D in over 12 years. And that is in absolute terms. R&D as a percentage of revenue has been even more dismal, at only 5% of sales.

Yet Microsoft spent over 12% of its revenue on R&D just last year. And they have been increasing this amount nearly every year over the last decade. This substantial investment has paid off for them. The software maker has been experiencing consistent increases in growth in most of its fiscal quarters.

IBM’s focus on improving meaningless valuation ratios has led to their massive capital misallocation. As a result, IBM has either missed or underinvested in EVERY single major technology trend over the last 15 years. Just think of the three biggest technological disruptions in the last decade and a half.

Cloud computing, software as a service (SAAS), and mobile.

Do any of IBM’s products come to mind when you think of these three emerging technology spaces? Nope.

Names that likely do come to mind are the ones investing in their futures. Amazon (AMZN), Salesforce.com (CRM), Apple (AAPL), Microsoft and other innovative companies.

Low interest rates and cheap money have created an extremely cutthroat environment. It’s a winner take all battlefield, where companies need to keep margins low and either evolve or die. IBM is dying.

Stanley Druckenmiller, one of the greatest traders alive, has long been touting IBM’s folly. He has called for its inevitable decline many times with statements such as:

“If you want to be short innovation, be long IBM.”

We completely agree with Druckenmiller’s sentiment. This is why we believe IBM will be trading at closer to $90 rather than $200 in 18 months time.

IBM has only itself to blame. Its focus on short-term and superficial earnings ratios will come at a great cost in the future.

Throw in other major equity headwinds (rising dollar, slowing China, turning business cycle, and possibly rising rates) and you have a short opportunity handed to you on a silver platter.

But hey, at least IBM CEO Ginni Rometty got that eight-figure bonus last year for improving the company’s EPS.