The August Macro Intelligence Report: A Value Investing Manifesto was officially released last night! We’ve already gotten some amazing feedback from current subscribers. In the first 20 pages I dissect our exact framework for identifying and evaluating highly asymmetric stocks. Using this framework we have identified two value picks in the tech sector that I think will soar over the next 12-18 months. Finally, since the SPX is back up at highs, Tyler wrote an entire section on portfolio hedging to make sure you can lock in your gains for the year. So if you’re not on board already, sign up now by clicking here. We have a 60-day money-back guarantee, so there’s literally no risk for you to learn our stock selection process and take a look at our highest conviction trade ideas. Click here and scroll to the bottom of the page to sign up for the MIR.

Economists Suck — Robert Shiller speaks on why he’s not a fan of classical economics.

Best Buy Is Still Alive? — Yup. Not only are they surviving the Amazon threat, they’re actually thriving…

AMZN vs SFIX — Amazon won’t take over the entire economy. There will still be places for companies like Stitch Fix.

I’ve been digging into value investing theory these last few weeks and came across this fantastic speech given by Li Lu (manager of value focused fund Himalaya Capital) at Peking University in 2015. If you don’t know who Li Lu is, you should. Despite keeping a relatively low profile, he manages the majority of Charlie Munger’s money and Buffet regards him as one of the three best investors alive today.

His talk is wide ranging and illuminating. Lu covers everything from the ethics and philosophy behind being a good money manager to his 3 era theory describing human progress and our current trajectory; he also of course covers value investing and investing in China specifically.

The piece is worth reading in its entirety, you won’t be disappointed. Here’s the link.

Also, here’s a great interview with both him and Munger published in a Chinese investing journal and republished by GuruFocus.

In a similar vein, here’s a great “Talks as Google” with famed value investor Bill Nygren (link here). Bill has shown himself to be one of the few talented value investors that has been able to adapt and evolve in response to the changing market and economy without turning his back on his value investing principles. He still seeks out quality companies that are selling for less than their intrinsic values. But, he’s developed the nuance and framework for understanding and valuing tech companies that have scale and growth curves not seen in other eras and which other value investors instinctively turn their noses up at (he owns Google and Apple).

Anyways, he walks you through his approach to investing, giving a number of examples. It’s an hour well spent.

I’ve been scouring data out of China to see if there’s any indications that the government is indeed trying to juice the economy again. But I’m not seeing any signs of material pickup in the numbers, yet. One important data point I like to pay attention to is China’s fixed asset investment, particularly from SOEs since they’re responsible for so much of the spending in the economy. And the trend in SOE fixed asset investment is not good… It recently hit year-over-year growth of just 3%, down from 23%+ in early 2016. It’s close to turning negative for the first time since 2002. 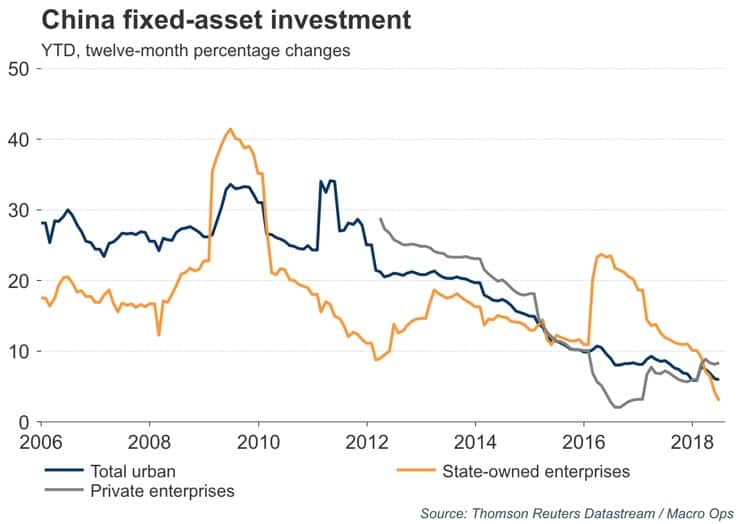 I just started listening to a new podcast this week that I really enjoy called Business Wars. It’s a series of short narrated stories about the greatest contests between rival businesses and their struggle for survival. The Netflix versus Blockbuster series is a good place to start. Here’s the link.

The trade weighted dollar (DXY) just closed above a significant level (its 200 and 100 week moving averages) that it’s been battling over the last two months. If price holds above these levels into the weekly close this would mark a significant technical breakout. It also offers a good R/R entry point for those of you not long the dollar yet. You can put a stop right below this week’s low. We’ve been long the dollar since early April and have been adding on the way up. I’m a little suspicious that this may be a bull trap, seeing as how stretched the bearish positioning has become in precious metals. So I’m going to wait for another strong weekly close to give me confirmation before I add to the position again.

In making investments, I have always believed that you must act with discipline whenever you see something you truly like. To explain this philosophy, Buffett/Munger likes to use a baseball analogy that I find particularly illuminating, though I myself am not at all a baseball expert. Ted Williams is the only baseball player who had a .400 single-season hitting record in the last seven decades. In the Science of Hitting, he explained his technique. He divided the strike zone into seventy-seven cells, each representing the size of a baseball. He would insist on swinging only at balls in his ‘best’ cells, even at the risk of striking out, because reaching for the ‘worst’ spots would seriously reduce his chances of success. As a securities investor, you can watch all sorts of business propositions in the form of security prices thrown at you all the time. For the most part, you don’t have to do a thing other than be amused. Once in a while, you will find a ‘fat pitch’ that is slow, straight, and right in the middle of your sweet spot. Then you swing hard. This way, no matter what natural ability you start with, you will substantially increase your hitting average. One common problem for investors is that they tend to swing too often. This is true for both individuals and for professional investors operating under institutional imperatives, one version of which drove me out of the conventional long/short hedge fund operation. However, the opposite problem is equally harmful to long-term results: You discover a ‘fat pitch’ but are unable to swing with the full weight of your capital. ~ Li Liu, Himalayan Capital

There’s a LOT of truth in this little paragraph…