Someone shared this on the twitter, @chriswmayer maybe? Anyways, it’s a good read about a little known but highly respected value investor by the name Norbert Lou who runs Punch Card Capital.

The writeup, done by Santangel’s Review, covers Norbert’s investing career from start to present along with his framework and approach to markets plus a few case studies of his best (and worst) investments thrown in for good measure.

Norbert’s origin story is a unique one. You should read the article for the full scoop but he started out investing $60k of his mother’s nestegg which he turned into a few million dollars in less than 9-years. All while working a full-time job. He was then seeded for his fund by Joel Greenblatt because Joel liked Norb’s investment write ups on the Value Investor’s Club so much. Not bad. Give it a read, here’s the link and a section I like from the piece:

A few years before he started Punch Card, Norbert had read a speech in which Charlie Munger reverse engineered the success of the Coca Cola Company. Even though Munger did not intend it as a stock pitch, Norbert later called the speech “the best stock write-up ever.” Unlike almost everyone else on Wall Street, Munger spent no time focusing on the balance sheet, income statement, or earnings multiples. Rather, he spoke almost exclusively about qualitative factors, such as economies of scale, universal appeal, and a strong brand that helped turn Coca-Cola into the world’s most dominant beverage company. “You can identify certain business momentums in the real world that aren’t necessarily in the financials and allow for sustained returns on capital,” Norbert learned.

He had already seen business momentums at work in some of his biggest winners: economies of scale in NVR, for example, and network effects in NII Holdings. Norbert also realized that the qualitative factors that drive sustained returns on capital are not always obvious at first. “NVR’s management didn’t even know how great the company was,” Norbert noted. “There is no universal test for a great company.” Another lesson of Munger’s speech: on those occasions when several of these qualitative factors occur together, the results can be outstanding. “Supernormal results are usually achieved through the combination of multiple forces working together,” Norbert said.

Check out the following short Twitter thread from one of my favorite follows @teasri (link here).

He comments on a recent CLSA report regarding China’s weakening credit multiplier and notes that two forces are at work, these being (1) A liquidity trap where monetary easing fails to kickstart credit growth and (2) The “pushing on a string” effect. Dalio often talks about this and its impact on DM economies currently but @teasri notes how when new marginal credit fails to boost economic activity it typically flows into bidding up asset prices, instead.

I shared in last week’s Musings a section from a Nomura report which showed their indicators of sentiment for local investors in China had reached euphoric levels. Given the incredible year-to-date run up in Chinese equities, that sentiment is understandable. The fundamentals behind the move though are not due to an improving economy (see next section) but rather a consequence of China pushing on a string (also, perhaps MSCI planning to raise their China exposure levels).

All signs point to a continued slowdown in the Chinese economy. Charts via Morgan Stanley. You should give Patrick O’Shaughnessy’s latest podcast a listen. It’s good. Really good. Here’s the link.

The theme throughout the interview is the unstoppable march towards “Global Disunion”. The antithesis of Globalization. Peter talks about how this trend will vastly reshape the world as we know it; China will fall apart (again), the eurozone will dissolve, and self-sufficient countries like the US will weather the new epoch the best. He also covers the changing landscape of the energy market as well as where he thinks we’re likely to see the next major war pop up (hint: Russia moving back into Eastern Europe).

Peter used to work for Stratfor and it shows. He uses a similar geopolitical framework for understanding the world as the one developed by George Friedman, Cofounder of Stratfor. The framework is one that focuses on constraints rather than possibilities. Here’s a section from Friedman’s book “The Next 100 Years” which outlines this framework.

Geopolitics assumes two things. First, it assumes that humans organize themselves into units larger than families, and that by doing this, they must engage in politics. It also assumes that humans have a natural loyalty to the things they were born into, the people and the places. Loyalty to a tribe, a city, or a nation is natural to people. In our time, national identity matters a great deal. Geopolitics teaches that the relationship between these nations is a vital dimension of human life, and that means that war is ubiquitous.

Second, geopolitics assumes that the character of a nation is determined to a great extent by geography, as is the relationship between nations. We use the term geography broadly. It includes the physical characteristics of a location, but it goes beyond that to look at the effects of a place on individuals and communities. In antiquity, the difference between Sparta and Athens was the difference between a landlocked city and a maritime empire. Athens was wealthy and cosmopolitan, while Sparta was poor, provincial, and very tough. A Spartan was very different from an Athenian in both culture and politics.

If you understand those assumptions, then it is possible to think about large numbers of human beings, linked together through natural human bonds, constrained by geography, acting in certain ways. The United States is the United States and therefore must behave in a certain way. The same goes for Japan or Turkey or Mexico. When you drill down and see the forces that are shaping nations, you can see that the menu from which they choose is limited.

Kind of reminds me of the “psychohistory” used by The Foundation from one of my all-time favorite sci-fi series of the same name.

I’ve been following US iron ore producer Cleveland Cliffs (CLF) for a while now. The long-term chart has a lot going for it and I noticed that Michael Burry (the value investor profiled in The Big Short) recently took a large position in the stock. 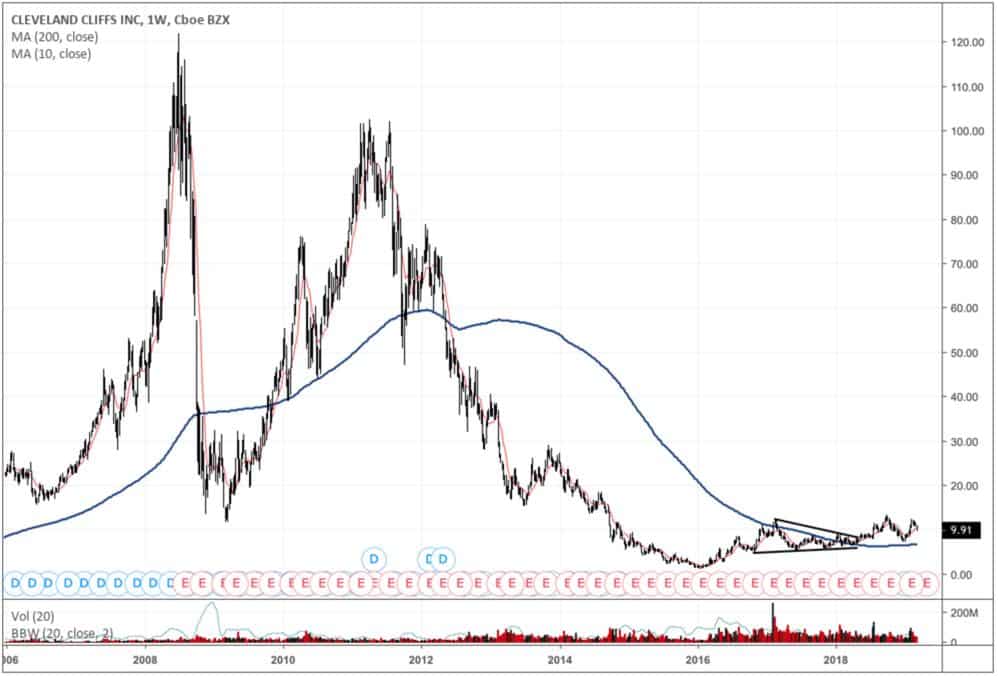 Revenues and cash flows are trending in the right direction: up and to the right. And yet the stock is trading for less than 3x earnings. Maybe the market is scared off by the company’s debt? I don’t know… A cursory look at its balance sheet shows they shouldn’t have any problems there. The vast majority of CLF’s debt isn’t due until 2025. The company has an EBITDA-capex/interest expense coverage ratio of 4.6x, which is plenty. And this is near the bottom of a long cyclical bear in iron ore / steel pricing.

Insiders seem to think the stock is a good buy. They’ve been gobbling up the stock over the last two years.

I’ve gotta dig into it more. But on first take, it seems like quite a bit of disappointment is already baked into this cake.

Theory cannot equip the mind with formulas for solving problems, nor can it mark the narrow path on which the sole solution is supposed to lie by planting a hedge of principles on either side. But it can give the mind insight into the great mass of phenomena and of their relationships, then leave it free to rise into the higher realms of action. There the mind can use its innate talents to capacity, combining them all so as to seize on what is right and true as though this were a single idea formed by their concentrated pressure—as though it were a response to the immediate challenge rather than a product of thought. ~ Carl Von Clausewitz

Clausewitz would have been a good trader.