We’ve been writing since the beginning of the year that there are two important macro drivers to markets at the moment. These are:

The market seems to be firmly focused on the second driver, the Fed. But, for some reason, still largely ignoring the many blaring warning signs in Chinese economic data — at least for the moment. This data is telling us that Xi and company are moving along with their stated goal of deleveraging.

The market appears to be operating on the old assumption that the CCP will just inject lots of credit into the system the moment things get rough. But, as we’ve been noting the last few months, this isn’t going to be the case.

Our baseline needs to be that China will continue to actively deleverage and attempt to reorganize its economy. This will continue to have increasingly profound effects on global markets. We should expect this story to play out until the end of 2019, at the earliest. That’s when the CCP is likely to reverse course and juice its economy so it can be strong in time for the Party’s centennial anniversary in 2021.

Let’s look at the charts.

The YoY change in the Global Manufacturing PMI has turned negative for the first time since 2015, bringing global equities lower with it. Fathom Consulting’s Chinese economic momentum indicator (blue line), which has a positive leading correlation to commodities, has turned over and is heading lower. If you were wondering why crude oil prices have collapsed recently, this is one of the reasons… Earnings momentum in China has turned negative and is now at its lowest levels since 2015. M1 money supply growth is at its lowest levels since… you guessed it, 2015. There are increasing signs of deteriorating consumer sentiment and spending. This slowdown is already being sniffed out by investors in US stocks with high exposure to China. Below is a chart that aggregates the return performance relative to the S&P of the 10 US companies with the highest exposure to China as a percentage of revenues. We can see that these companies have experienced massive underperformance as of late — similar to the years from 14’ to 16’. We should expect this trend to continue. Bloomberg recently noted that borrowing costs for China’s high-yield issuers (most of whom are real estate developers) have doubled this year, and now sit at their highest levels in over four years. In addition, the property sector faces a record $18 billion in maturities coming due next quarter. And according to Bloomberg, “that number is expected to double if investors demand early repayment on some of these notes.” 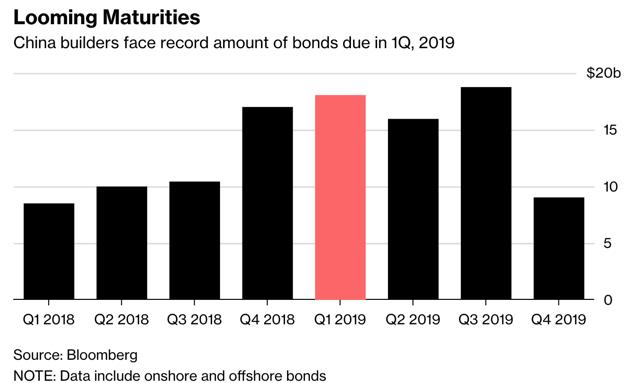 One gets the sense that “the most important asset class in the world”, as Jim Chanos (and your author) refers to China’s property market, is about to get interesting.

Again via Bloomberg, “soon-to-be-published research will show roughly 22 percent of China’s urban housing stock is unoccupied, according to Professor Gan Li, who runs the main nationwide study. That adds up to more than 50 million empty homes, he said.”

The chart below shows just how extraordinary this is. Nearly everything in China, household wealth, business income, loan collateral etc… is directly linked to the property market — a market which has been used as the primary source of speculation by the masses for the last 20 years… and one which hasn’t been allowed to suffer material losses, ever. Imagine the knock-on effects of an unwinding Chinese property market. Just think what that would do to commodities alone…

Xi Jinping made it clear what he wants when he said “houses are for living in, not for speculation.” We should probably pay attention. What does all this mean though from a practical investing standpoint?

Well, over the longer-term (next 12-months) we should expect similar macro dynamics to those of 2015, or worse. The last time the Chinese materially delevered.

I recently showed the below chart from Ned Davis which is signalling an 80% probability of a global recession. And since 1970, when this indicator has given a reading above 70, we’ve ended up in a recession 92.11% of the time. Here’s a chart I made which aggregates all net speculative long US and USD synthetic positioning (orange bars) along with the S&P 500’s performance relative to emerging markets (EEM). You can see that when there’s significant spikes in bullish US asset positioning (orange spikes) it often coincides with a near-term top in relative US outperformance. We recently saw our largest US long positioning spike since early 2016. That means investors are pretty crowded to one side of the boat. It’s not going to take much positive EM/China news (maybe hints at a potential trade deal or anticipation of renewed easing etc..) to cause a position unwind.

Whether this performance reversion lasts a week, a couple of months — or happens at all —  is anyone’s guess. But it’s something to keep note of. And we’ll just have to follow the tape and play the action as it comes.

We’ll consider playing some Chinese and EM names for a swing trade — IF they set up technically. Names like Tencent (TCEHY) and JD.com (JD) which have been obliterated over the last 6-months and are due for a strong bounce. And we’re currently long an Argentina bank (GGAL) with a tight stop.

Longer-term, the primary trade is to continue to be selectively long US assets, long USD positions, and short gold. It makes sense to move more money into defensive sectors, like XLP and XLU as well.

We should expect increasing market volatility in the year ahead and greater dispersion in stock returns (ie, a widening gap between winners and losers).

That’s all I got for now. The macro landscape continues to evolve at a rapid pace and I’ll update my views accordingly. Keep tabs on our research section of the website for the latest updates.