Cash Flows Over Earnings, A Changing Asia, And Wisdom From Mr. Coolidge

Probabilities Not Predictions – Alex writes about how our job as traders is to size up the asymmetry of outcomes rather than make predictions.

Michael Mauboussin shared on the twitter an Amazon shareholders letter from 2004 where Bezos talks about why Amazon focuses on increasing free cash flow per share over the more popular earnings per share. He lays out in layman terms why free cash flow is a superior metric when evaluating the ability of a business to create value for shareholders. It’s a simple, yet for some reason, widely misunderstood concept. It’s a short read and is five minutes well spent, check it out (link here).

One of the more powerful secular trends in the world today — one which is only beginning —  is the shift in the world’s economic and geopolitical center of gravity from the West to the East. Here’s an excerpt from one of our monthly reports explaining why that is.

By 2030, global middle-class consumption could be $29 trillion more than in 2015. Only $1 trillion of that will come from more spending in advanced economies. Today’s lower middle-income countries, including India, Indonesia, and Vietnam, will have middle-class markets that are $15 trillion bigger than today.

We are witnessing the most rapid expansion of the middle class, at a global level, that the world has ever seen. The vast majority— almost 90 percent—of the next billion entrants into the global middle class will be in Asia: 380 million Indians, 350 million Chinese, and 210 million other Asians.

It’s a simple numbers game in which the West can’t compete. And it’s going to have an enormous impact on how the world looks 20 years from now.

On that note, the South China Morning Post (SCMP) wrote a great long form piece on how things are changing over in Asia and some of the growing pains they’re experiencing, as a result. Here’s a snippet from the piece and you can find the article here.

A continued boom, however, is very much in Beijing’s interests, giving China’s construction sector, which is under stimulated at home, opportunities to build. In 2016, 30 per cent of all foreign investment into Cambodia came from China, and at a meeting between Hun Sen and Chinese President Xi Jinping in December, an additional US$7 billion was pledged by Chinese companies. The fact that Chinese state-owned enterprises are involved in the Thai Boon Roong Twin Trade Centre has convinced some analysts that the skyscrapers will actually materialise.

China’s “Belt and Road Initiative” has spurred much of the construction boom elsewhere in Asia, too. Last year, India committed to building 83,000km of roads before 2022. Fourteen skyscrapers, each to stand more than 200 metres tall, are planned for Jakarta, the capital of Indonesia. And Philippine President Rodrigo Duterte has launched a “Build, Build, Build” campaign and ambitious infrastructure spending spree.

And since we’re already talking about Asia, here’s a must-read from the site Macro Polo (a think tank of the Paulson Institute) discussing why it’s unlikely we’ll see China do an about-face on their deleveraging, this time around.

This is the number one thematic we’re tracking this year. China has been and still is the most important macro variable this cycle. Policy out of Beijing affects the rest of the world; especially emerging markets and commodities. Pay attention to this as it’s likely to become a much more dominant narrative in the months ahead.

Lastly, here’s a great write-up from Brad Setser where he lays out the long list of China’s trade abuses which led to the budding trade-war we have today. Here’s the link.

This is depressing. These two charts from Goldman Sachs show the percentage of the US population that is either addicted to opiods or incarcerated, relative to every other developed nation. We are doing something horribly wrong in this country… Last summer we began pounding the table calling for much higher crude prices. In the January edition of our Macro Intelligence Report (MIR) titled 2018 Strong Opinions, Weakly Held  we updated this bull case and wrote:

Despite this run up in oil and energy stocks, we’re still hearing primarily bearish takes on the sector with traders looking to call a top after every rise.

Typically after a 30% rise over a short few months, a bullish narrative becomes popularized and widely adopted. But we have yet to see that. This is all the better because the greatest bull markets climb a mountain of disbelief. And that is what we’re seeing here.

This negative sentiment just bolsters the bull case. We think 2018 will be the year of the commodity bull. We expect WTI crude oil to climb over 20% higher and finish the year above $75bbl. This will drive energy stocks (our basket included) up by multiples, and the energy sector will finish the year as one of the best performing sectors. I’m still bullish on the longer-term prospects for oil but I believe that Texas Tea may be in for a rough patch in the weeks-to-months ahead.

The primary reason is that sentiment and positioning have clearly shifted from negative at the start of the year to excessively bullish today. This chart from our friend Adam over at Free CoT Data shows how stretched net speculative positioning has become. Specs are more long now than in 14’ and we all know how that turned out. I’m not expecting to see a sell off anywhere close to the one we saw in 14’. But, considering the stretched positioning and sentiment, and the fact that we’re entering what’s historically been a weak stretch of the year for crude, I’m willing to take a swing at the short-side. I think we could easily see a pullback down to the $60 range.

Here’s a pic of my summer reading list that I’ve put together so far. It’s much lighter than usual on the market/economic side because I’m somewhat burnt out on the subject, so I’m giving myself a short break. 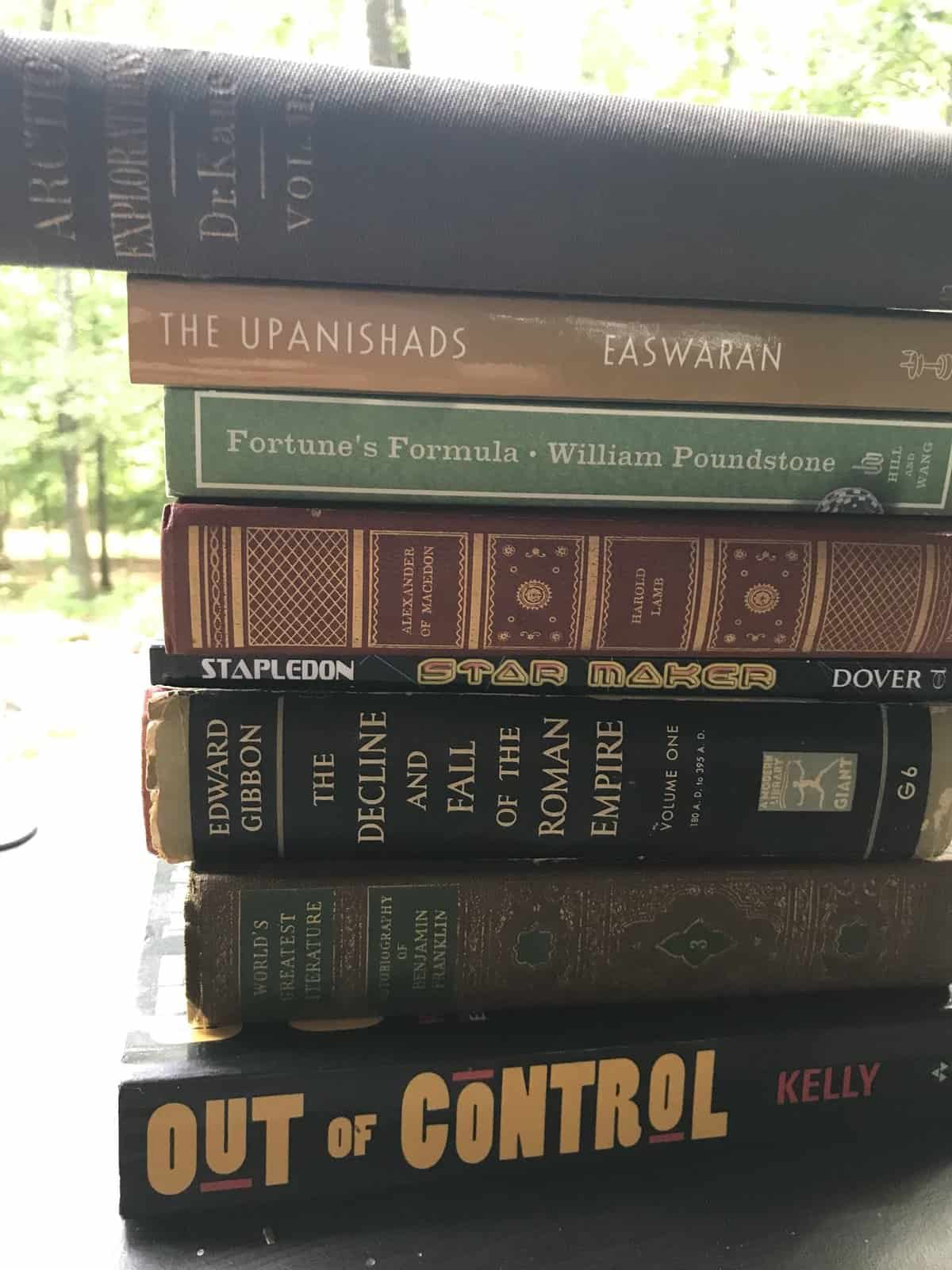 I finished reading The Upanishads, translation version by Easwaran.

I also recently read The Dhammapada, which I liked, but I found The Upanishads to have a lot more meat. And to be honest, it’s probably one of the more powerful books I’ve read. Here’s just a few of the many wisdom laced passages from the text.

Human beings cannot live without challenge. We cannot live without meaning. Everything ever achieved we owe to this inexplicable urge to reach beyond our grasp, do the impossible, know the unknown. The Upanishads would say this urge is part of our evolutionary heritage, given to us for the ultimate adventure: to discover for certain who we are, what the universe is, and what is the significance of the brief drama of life and death we play out against the backdrop of eternity.

The Self in man and in the sun are one. Those who understand this see through the world And go beyond the various sheaths Of being to realize the unity of life. Those who realize that all life is one Are at home everywhere and see themselves In all beings. They sing in wonder: “I am the food of life, I am, I am; I eat the food of life, I eat, I eat. I link food and water, I link, I link. I am the first-born in the universe; Older than the gods, I am immortal. Who shares food with the hungry protects me; Who shares not with them is consumed by me. I am this world and I consume this world. They who understand this understand life.” This is the Upanishad, the secret teaching.

I definitely suggest picking it up and giving it a slow read.

Nothing in the world can take the place of Persistence. Talent will not; nothing is more common than unsuccessful men with talent. Genius will not; unrewarded genius is almost a proverb. Education will not; the world is full of educated derelicts. Persistence and determination alone are omnipotent. ~ Calvin Coolidge